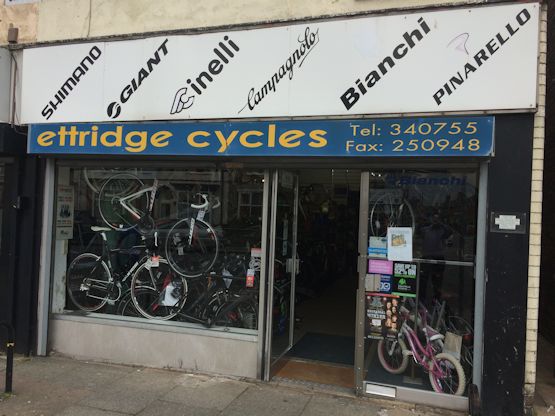 At a time when Bradley Wiggins, one of the world’s biggest names in cycling has announced his retirement, there has been rather less of a fanfare when one of Grimsby’s biggest names in cycling has also decided it’s time to prepare for his own retirement.  But that is the decision that has been made by Grimsby businessman and cyclist Steve Ettridge.  The business, Ettridge Cycles, was founded in 1977 and has been owned and run by the family ever since.  Steve was a successful cyclist both at home and abroad and used his skills to work as a team mechanic for a number of years, including on what was then known as The Tour of Britain.

Trading from freehold premises on Cromwell Road the shop is geared up for all genres of cycling.  There is something there for the experienced road racer together with entry level bikes including the now popular hybrid variety.  The business enjoys a loyal and varied customer base, including of course the 40 something male who has taken to cycling following the Olympic and tour success of Wiggins, Hoy, Cavendish and Co rather than taking up golf!  “Bike sales sored following the Team GB success in 2008 and 2012 and whilst the number of people taking up the hobby has levelled out a lot of the people who jumped on bikes for the first time a few years ago are now ready to upgrade and try something new.” Said Steve.  “ in addition to the bike sales we also carry out a lot of servicing and repairs ranging from mending a puncture and replacing brake blocks up to a full and comprehensive service.”

Property agents Clark Weightman are handling the sale.  Director Carl Bradley recognises the importance of businesses such as Ettridge Cycles.  “I truly believe that the small independent bike shop has a great future, whilst it is possible to buy a bike on line it can be a significant purchase either as a commuter bike, leisure activity or a seriously competitive cyclist.  You need to know that the bike is a good fit, minute adjustments can make a massive difference to the comfort and performance of a bike and Steve is willing to spend time with a purchaser and pass on his knowledge and skills to them.  The property is also underutilised and the potential exists to expand the clothing and accessories side of the business.  Whilst Steve has made the decision that he wants to retire he will remain actively involved in the day to day running of the shop until a sale has completed.”

Ettridge Cycles are currently stockists of Bianchi, Pinarello, Focus, Cervelo and Giant. The business and freehold property is for sale at a guide price of £135,000 plus stock at valuation.  For further information please contact Carl Bradley on 01482 645522.